Preparing for the treatment in Germany

First and foremost. . . . Having MS is NOT a death sentence. Some people have a relatively benign and modest form of the disease. And some people have a severe form that is very debilitating. But one thing about MS. . . it very rarely causes a decrease of lifespan. MS is really all about impact to lifestyle.

I've been pretty lucky up until now. I didn't get it nearly as bad as other people, But it IS getting worse. And that puts the fear into me that I will have trouble supporting my wife and son. If they were not in my life I wouldn't even consider such a risky and awful procedure like a stem cell transplant. But because they are the most important part of my life, I have to take the risk to cure my MS so I can be part of the life of my treasured family. I don't want miss out on this wonderful experience with my wife (Yuko) and son (Riki) if there's anything I can do to about it. And I can. . . . get an ablative stem cell transplant.

So the first thing I've had to prepare is my state of mind. All I have to do while here alone (at first) in Germany is look at the pictures of Yuko and Riki and then there's no stopping me. . . full steam ahead to seek the cure for MS. I figure that I'd jump in front of a speeding bus to save them. So why not do something less radical. like a stem cell transplant? Easy logic, easy decision for me. 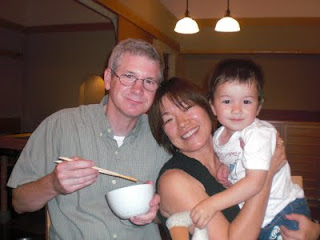 Riki at daycare on Haloween 2009. Melts my heart. 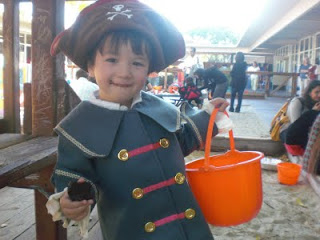 OK, now that the most important decision is out of the way, what did I do to prepare to get here? The first thing is education. I learned everythinbg I possibly could about the treatment regimen and the treatment outcomes for MS. As for the regimen, the most abundant info comes from cancer treatment resources. Read everything I could. This way I can converse with medical staff in approaching and conducting the treatment to a succesful outcome.

For treatment outcomes with MS, this is still earlier in the information lifecycle, as opposed to later. There is not as much data for this BMT treatment on MS as there is with other diseases such as cancer. There have been 6-10 initial small studies for doing BMT for autoimmune diseases such as MS, and all of the study data is very consistent. Although there is demonstrated benefit for all forms of MS, it works better on earlier forms of MS with less total present disability (EDSS scale less than 6.0).

Preping for the return I expected that I might still have some eating or digestive or (low) weight issue, so I purchased several cases of ensure-like nutritional drink and put it in the refrgerator for when I return. I think I will be thanking myself for doing this. And just for the heck of it, I also bought several boxes of high-protien nutrition bars to go along with the nutrition drink. Just to be on the safe side.

As for an MS-specific issue. . . . the studies to date indicate that most MS patients have a transitory worsening of existing physical deficit with BMT treatment. Since my legs are weak, I expect the treatment to possibly cause a temporary problem with walking directly following the procedure. For this reason I bought a portable, lightweight wheelchair that can go on an airplane. I bought this one. . .

This is an expensive chair. But man! I gotta tell you I love this chair. Made by a Japanese company this is a engineering work of art. It's super lightweight, folds up very small and can be used to wheel someone on an airplane (which likely will be my case). Basically it is made extremely well. The best materials and best engineering practices to construct it. And no, I don't own any stock in this company nor do I get a sales commission. I'm just an engineering geek and this chair is a geek's dream. The only thing is that someone else has to push the chair. It is not the self-locomotive type. If you want it, I'll sell you mine after I return because I'm confident I won't need it for a long time. I'm planning on being cured!

I think this one is important and makes me feel especially appreciative of my wife. . . . she bought an electronic picture frame and loaded pictures of us together along with Riki. When I plug it in it cycles through more than 100 great family images. At the time I'm alone in the hospital I can watch this. I think it will help me tremendously.

OK, last thing. Of couse I'm going to lose all my body hair. So before leaving I had my head shaved. 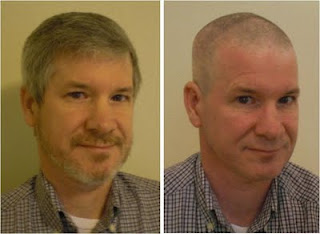 But it turns out that my chemo-induced hair loss likey will not occur for several more weeks. So I probably jumped-the-gun a little on this. My hair is already growing back rather quickly. I'm going to have to repeat this head-shaving ritual again in a couple weeks so that I don't have to watch it come out on the pillow. [Post-transplantation note: The optimum day to shave your head is day +1, after all the chemo is administered and just before the hair all starts coming out on its own. The hospital facility should be able to do this (head shaving) in the hospital room for you. Don't just let it fall out on its own. Its ugly and messy.]

As for Germany, just two things. . . . make sure all electronics operate on 220V, 50Hz, and have a travel plug adaptor for Germany-specific outlets. If you're from North America or Japan, the one like this will work fine:

There are no US outlets anywhere here. That goes along with the lack of Japanese-speaking individuals.

That's all. See you tomorrow!