Sorry that Ive taken longer to publish this post than I had originally intended. Especially because this one is so important. Because I had come to realize so early in my involvement with the hospital that everyone (and I mean everyone!) at Heidelberg University Hospital is so good and outstanding, I want to make sure that I make this clear to everyone that is not familiar with the center.

Also very important. . . . this is an open invitation to any & all Heidelberg University Hospital staff to come visit our family in San Jose, California (near San Francisco). [Update: we have now moved to Santa Barbara, California. Everyone still welcome!] You are welcome to stay in our home and we will take care of everything during your stay and be your faithful tour guides. We promise a very enjoyable vacation during your visit to California. It is the least we can do since all of you have given me something that I can never fully repay. . . you cured me of Multiple Sclerosis and kept me alive and as comfortable as possible while doing so. We are looking forward to seeing you in California at anytime you wish!

I had a chance to compare notes with a friend that also underwent basically the same autologous stem cell transplant that I did (he had the procedure for cancer treatment, not for MS), but he did it at Stanfod University Hospital. Like most people unfamiliar with having to undergo such a complex, uncomfortable and somewhat risky procedure, I would have thought that Stanford must be one of the best places in the world to receive such treatment. But you'd be wrong to think so when comparing to Heidelberg University Hospital. So although Stanford has good scientific excellence, compared to Heidelberg they lack the humanistic care that Heidelberg deserves first-place marks. However, Craig Garrison that underwent HSCT in 2001 at Methodist Hospital told me that his care was also first-class, and that the staff there treated him superbly. Good to know there are still some treatment facilities in the US where they still remember you are a human being that can benefit from compassionate & thoughtful care.

From the begining to the end of my care in Germany, everyone (and I mean everyone!) without a single exception provided the most excellent of medical care, but they also had the best humanistic care. I saw the same set of people on a daily basis (they didn't rotate excessively in and out of the ward so I could learn most everyone's name with ease and always see a smiling familiar face), and when I needed and called them 24 hours a day they were there ready to help within sixty seconds. Very consistent! Also perhaps a small thing to notice, but all the staff carefully followed ALL of the sanitation protocols, even being certain to use the alchohol antiseptic hand cleaner EVERY single time prior to entering the room. How often do you see US-based medical staff washing thier hands? Not often, in my opinion.

So something about the following pictures. . . . Unfortunately I was not able to catch everyone with my camera. So I hope the people in Heidelberg will forgive me for those people that I missed getting an image posted here. Those individuals are no less important and no-less appreciated by the patients (and me!). Also. . . the pictures here are not presented in any specific order. Please don't infer anyone's specific importance based on the order. Everyone here (including those not shown) are important.

First set of images are the doctors that I interfaced with. It is critical for me to make mention of a specific aspect of thier greatness here. Yes, all the doctors had the two crtical halmarks of great doctors. . . they all were fantastic clinicians and had wonderful (and often entertaining) bedside manners which made the stay pass by easier and faster than would have otherwise. No. . . the additional critical factor that ALL these doctors share is that they were able to embrace alternative theraputic ("outside-the-box") thinking. . . . specifically regarding the uniqueness and efficacy of performing a stem cell transplant for an autoimmune desease such as for my MS. Out of everyone in the Hospital Ackermann ward receiving a stem cell transplant, I was the ONLY one with an autoimmune disease. And every single one of the doctors (from Professor Anthony Ho, on down) agreed that the foundation science for this procedure was well supported for this treatment application. This is something that is virtually impossible to see with most medical professionals in the United States. All of these wonderful Heidelberg doctors have my undying respect and admiration for having an open mind and being able to mix the appropriate amounts of science, clinical care and humanistic care together.

And BTW. . . . Dr. Raab stopped by and visited me in the hospital on Christmas day on his own time. Dr. Thalheimer did the same on New Year day. Both visits really lifted my spirits. Aren't these guys great?!

The doctors (sorry to those that I missed posting a picture). I already miss all of them and can't wait to see them again when we next vacation in Heidelberg (click to enlarge):

And no less important, there are other wonderful professionals that helped around-the-clock that deserve HUGE recognition. This includes the nursing staff (that helped immensly to help me survive the procedure as healthy as possible and with the minimum discomfort possible), the apheresis group, the lab staff that did my daily bood draws, the outpatient clinic (that I used both pre- and post-transplant), and the adminstrative staff that makes everything in the autologous transplant department run like clockwork. Again, please forgive me for not getting everyone's picture here. But I have not forgotten you! (click to enlarge): 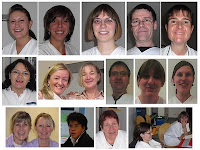 And I have to make a special note here regarding the staff that come into the rooms daily to sanitize the rooms to ensure the environment will not be the source of any infections. These great people perform a very critical function and might otherwise go less-noticed, but I want to make sure that everyone knows that I consider them as contributing to the reason I survived the procedure without any life-threatening infections. I'm sorry that I only have pictures for two of them, but I have to say that Virginia and Mercedes are great people. And it was so nice to talk with them when they came by that it helped to make the hospital stay go by easier (click to enlarge):

And there is one last individual that deserves a special note. Pictured here is Ms. Ivy Post. She stuck with me through my entire hospital stay from begining to end and was close by during every phase of my treatment. She administed my chemo drugs and kept me hydrated with lots of saline solution. And of course she did the most important job of returning my stem cells to me when I needed them on Day 0. Then, during the dark days when I became febrile netropenic with fever, she gave me the several various types of antibiotics and anti-fungal drugs I needed. And just as important, she fed me nutrients after I hadn't eaten for a week.

At the end of my stay when we had to say goodbye I told her the sad truth that although I appreciated her hard work and 24 hour dedication for so many days, I didn't want to see her anymore. So we shed a few tears and had a final hug before saying goodbye. It was bittersweet knowing that she helped me survive the whole process being there tirelessly 24 hours a day by my bedside, but also knowing that she was so damned clingly that sometimes I just "needed my own space" (especially in the bathroom). At least I know that she will be able to help countless more people over time that have to endure the same thing that I did. I wish her well, along with all those that she helps. I will never forget her. ( click to enlarge): 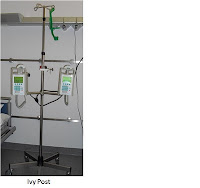