I know that a lot of people with MS will recognize this box of medication pictured here that I had forgotten about and found lingering in the bottom of my refrigerator as we were cleaning it out this past week (click to enlarge): 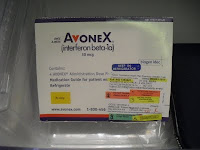 I post this picture mainly for my own entertainment & reminder of my previous life prior to my transplantation that completely stopped my MS disease activity & progression. I had taken Avonex interferon for 15 years prior to my HSCT procedure. Avonex, just like all the CRAB drugs only "slows" or "delays" the progression of MS symptomatic deficit accumulation by average of 30%, but does not stop the disease. As of today only HSCT can accomplish this. You'll notice on the prescription label that this box was issued in September of 2009, a few months prior to my transplantation. I used two of the four dose packs from this particular box and the remaining two dose packs have been sitting there in the bottom of my refrigerator for the past year-and-a-half. Ever since my HSCT procedure I have never again taken any MS drugs of any kind because they are no longer necessary or helpful (which is also the case with virtually all HSCT recipients). My underlying MS disease activity is gone. The curative effect of HSCT has returned to me my future because I no longer live with the uncertainty (and fear) of what might happen due to MS and the disease progression is no longer a part of my life. And have I mentioned how happy I am that after 15 years of chronic injections I no longer have to use a syringe since 2009 following my HSCT? Yeah, I think I mentioned that earlier. I don't mind to say it again though. This has contributed so much to the enjoyment of my daily life! (I get my own pleasure from acknowledging it out loud.)


So this is where you will come to understand my realistic reporting of the results of Hematopoietic Stem Cell Transplantation (HSCT) relative to my own MS-related disability. I'm not going to be overly-rosy or provide any exaggeration in the reporting of my current status. Here are a few basic facts as of today, a year-and-a-half since my transplant:

The future I lost 16 years ago when diagnosed with MS is now back. Because the HSCT procedure has completely stopped my underlying MS disease activity & progression I have regained enough certainty of the future that I can now better plan my life with my family!