Blood count history including today's numbers. Bottom line. . . leukocytes recovering quickly, and well. And although you can't really tell from the graph, the platelets are slowly rising. That's the absolute right trend and they will likely be good enough for Monday's hospital discharge. Still gotta remain vigilant against hemorage risk for a while though . . .

Picture outside the hospial room of the snow. Doesn't appear to be much but it is more than Heidelberg is accustomed. . . . 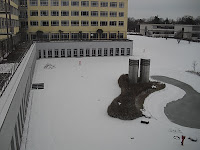