Today Judy and I made the rounds visiting all the doctors in preparation for the hospital admission. While sitting in the hallway waiting for our first meeting with Dr. Raab, some very nice and kind hospital volunteers came by and asked if we wanted a drink. Judy chose a coffee (that they actually served it in a “real” ceramic coffee mug, not just a Styrofoam cup. Aren't Germans awesome?!). I asked them if they had a nice riesling, but they said they didn’t. I then had to put on my desperation face and said I would be willing to down any Octoberfest brew they might have. None of that either. Figures. Then I decided to fall back on a medical foundation and said I could choke down a shot or two of IPA (isopropyl alcohol). I know hospitals gotta have that! Another refusal. Finally gave up and was then called in by Dr. Raab. 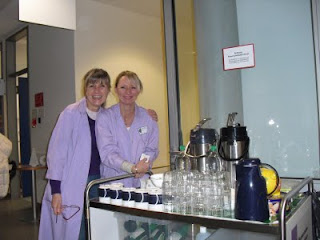 Our first meeting with Dr. Raab was the most critical, establishing two important understandings:

1) Dr. Raab carefully thought about the chemo protocol and he believes that following the HALT-MS study BEAM protocol is basically a better idea than doing a unique (for an MS case, like me) Melphalan-only protocol. He has an excellent point and I agree that we should do something in-line with the direction of the clinical trials since I'm only planning to do this once in my life. At least the BEAM protocol will have some future comparative baseline. So BEAM it is.

2) I will be admitted to the hospital tomorrow (Tuesday) morning. On this first day I'll have the jugular catheter inserted then begin the BEAM chemo the following morning which will take approximately six days to administer followed then by a one day break to clear the chemicals from my system and then the stem-cell infusion the following day. So it looks like my stem cell infusion "birthday" (day 0) will be December 23. I now have a clear understanding of the schedule (barring complications or unexpected adverse events that would be sure to throw it off). I am expecting a call on my cell phone early in the morning to tell me what time to come by to check in. 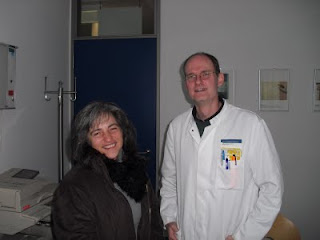 I am amazed at how closely the actual schedule has tracked with my original assumptions of what the schedule may have been like. In fact, the begin day and end-point are exactly on the same day that I originally projected! So long as I can avoid unexpected adverse events, looks like I very well may be able to be on an airplane home to California on Friday, January 8. (Bernhard, we should plan on this day departure and will work things out if we get a curve ball thrown our way that disrupts the schedule from this plan.)

Also, as required by hospital policy, Dr. Raab ran through the litany of possible side effects and adverse reactions that I needed to be informed of regarding the procedure. Infections are a likely reason that I would be sent to the ICU and then all bets are off for the schedule end-date. I fully understand these issues, and although risky, he did an excellent job to make sure we sufficiently covered them. I did not hear of any items that I was not already aware of, so the risk tolerance window I have already decided to accept is unchanged and I accept the risk of all these possibilities. It's the price for potentially curing my MS.

And as a follow-up to the previous rear-end swab check I had during the first day visit. . . . they were specifically looking for Vancomycin resistant pathogens. These are dangerous and extremely difficult to treat infections and they want to be sure they don't pair up mismatched people in the hospital rooms with such an infection. (Turns out I tested negative. So the roommate they stick me with will also be negative as he will also be undergoing an autologous stem cell transplant on approximately the same schedule that I will be on.)

But the interesting thing here emotionally is that I almost feel OBE (Overtaken By Events). On the one hand I'm quite happy that things are moving along in an expeditious manner (thinking about the MS cure). And on the other hand I'm thinking "Holy Mackerel!' All this crap is ready to happen right now without delay! Like the proverb. . . Be careful what you wish for. You just might get it. I have wished, and received.

Dr. Raab then walked us over to the Ackermann hospital ward where I will be admitted tomorrow morning. He introduced us to the doctor responsible for the ward care, Dr. McClanahan. (Sounds like an Irish name to me. But Dr. Raab told me it is an old German name. Interesting.) She is essentially responsible for all the in-patient & clinical chemo treatment of patients receiving autologous transplants in the Ackermann ward (specific wing of the hospital). I am absolutely certain she will end up on my priority list of people receiving fine wine. I am going to completely rely on her to keep me alive. She looks to me to be fully up to the task. 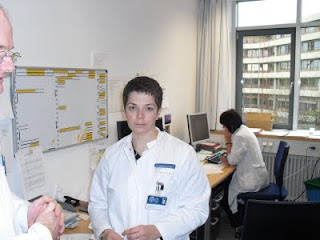 After we met with Dr. Raab, we went over to the Apheresis group so Judy could meet all the great people over there. We also had an opportunity to pass out some bottles of wine, which I hope they will enjoy. After meeting them, Judy commented that she "wants to party with these people!" I endorse the idea. (Sorry, I forgot to take a picture here. Didn't want to interfere with their busy schedule too much.)

Then we stopped by the Neurology department and dropped off a bottle of wine for Dr. Storch-Hagenlocher with her admin. Since things have come along so well I thought a peace offering was warranted. I hope she enjoys it.

We also got a chance to say hi to Dr. Thalheimer. Always a pleasure to do that on any day. 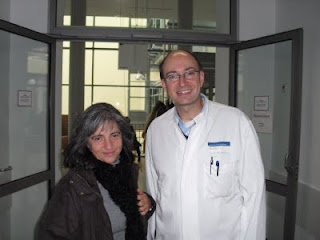 As Judy I and have talked, she mentioned a brilliant idea of inviting the German doctors (and their families and any other Heidelberg staff that can make it) to a one year George "stem cell transplant birthday" in California. We will definitely plan this for next year so that these guys can be held up as medical heroes. And also a good chance to get them all drunk on good Sonoma wine! And since California will likely still be broken at that time, I'm sure there will still be an opportunity to help pump up the California economy.

So I'll report again tomorrow after being admitted to the hospital. I understand that the hospital has Wi-Fi. So I'm counting on being connected.

If nothing unforeseen happens to change things, this is the schedule as it has unfolded (click on the image to see larger). . . . 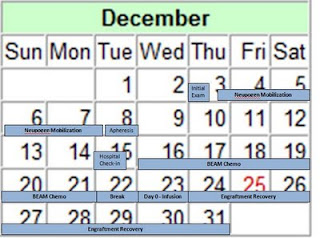 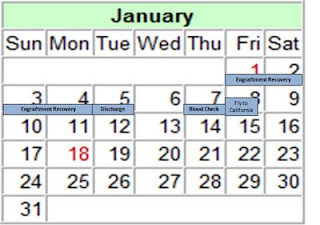