Quick message including mention of my good friends at Mattson . . . .


So I'm able to follow a pretty regular hospital schedule now. . . . Wake up around 7:00am (still dark outside), shower (thanks to Yuko and Judy for the liquid body soap from the store, it's great!), dress and then go weigh myself and then get the usual morning tests from the nursing staff. They always ask if I feel any nausea from the chemo. Nothing yet. Can still eat well (the hospital food is far better than I expected. And better than any airplane food I've had). Maybe next week things will change with the nausea. Who knows. Everyone responds differently from chemo. I'll keep my fingers crossed.

Then I get my two infusions of chemo (Etoposide and Cytarabine) starting at 8:00am. Together with the saline flush that follows it about a three hour process. I repeat the same thing at 8:00pm. I usually make it to sleep about midnight. Yuko will stop by again later today and we can go out into the quiet hallway of the main hospital and talk junk behind people's backs. (No! We would never do that. Well, Yuko would never do that.)

A few things are becoming apparent. . . the first thing is that I am currently gaining weight. I've gone up 5kg and now total 70kg (154 lbs now but started at 143 lbs). I think this is a direct consequence of the anti-emetic steroids I'm taking to stave off the nausea that causes fluid retention. I'd rather take the weight gain over the nausea any day. I hope it lasts through the treatment, but that may be wishful thinking. But even if it doesn't last there are many more options of various anti-emetic drugs remaining in the arsenal. May have to try a few others next week.

The next thing is that my systolic blood pressure for the past couple of days has been hovering around 140, quite high. My BP has never been more than 120. Again, this is most likely a direct consequence of the steroids I'm taking. After the treatments are over and I get off the steroids the doctors assure me that my BP will return to normal.

Also not (yet) a big deal, but I’m starting to feel some tissue roughness on the roof of my mouth. I suspect this is an early indication that mucositis is on the way. I’m super grateful that Dr. Raab authorized the Kepivance (Palifermin) prior to the chemo. If I do get mucositis then it is likely to be far less serious that it might otherwise be. Somehow Yuko and I will have to find a way to repay him for helping me tackle this early on.

Yuko and I spent time together today and she got to meet my new Japanese roommate, Tateishi-san, along with his wife, brother and father. (Cooincidentally Tateishi-san and I are the same age, separated by just a few months.) Tateishi-san has multiple myeloma (he gave me permission to mention this) that was first treated with straight-up chemo. That turned out to be a failed treatment, hence then moving onto the more aggressive stem cell transplant. I’m sorry he has to go through two rounds of aggressive chemo. Kawaiiso desne! But he has an amazingly positive attitude for having to face such hardship. Today Yuko and I met his wife and we saw pictures of his two children, ages 8 and 1. Unfortunately (or fortunately) they don’t let children in the ward due to the high risk of infection. Same reason Riki is in Japan with the in-laws. 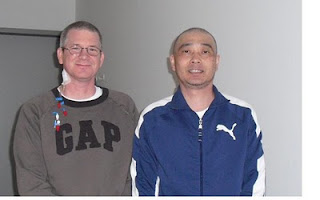 I think Obaachan (grandmother in Japan) is doing a great job to take care of Riki. I have no idea yet how we will repay her and the family for their kindness and endurance to do the critically important task of caring for Riki while we are here in Germany. I suspect fine California wine will somehow be involved.


A picture of Robert taking Yuko and Judy to old town. Thanks again Robert, you sweetheart!! 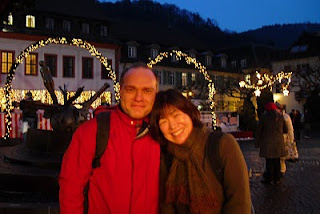 BTW. . . all my Japanese friends will like this one. This is the sign in the reastaraunt (obviously) indicating the restoom location. The server told Yuko that the left sign (in Japanese) was initially mounted upside down for a long time because the Germans there can't read Japanese and didn't know any better. Apparently after a long time some Japanese person mentioned it to them and they finally righted it. I wonder if any Japanese people were forced to pee while standing on their head? 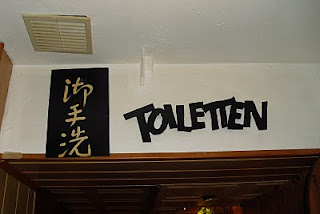 Last note to Bernahard. . . thank you so much for lugging that wheelchair box (that included my filter masks) all the way to Munchen. And thanks for shipping to our aprtment here in Heidelberg. Got everything yesterday, including the brown-sugar cinamon pop-tarts that will keep me alive after I'm discharged from the hospital It was a VERY nice suprise and gift of kindness! We'll celebrate more when you come to Heidelberg. At least Yuko will be able to Qaplah! with you on my behalf.


Merry Christmas eve to everyone!