First day checking in with the doctors & starting treatment!

Wow. What a day! Things have substantially moved along. Even more than I could have hoped-for. Tonight I begin taking my outpatient self-injections of G-CSF Neupogen in preparation for my Apheresis stem cell collection scheduled for Tuesday next week. So I'm on the road to imminent treatment now. No turning back.

But I'm getting ahead of myself here. Before I get to the end, let me start in chronological order of what went on today, a long day of many activities.

So first I checked in with the autologous unit admin, Ms. Prochaska. (Woman pictured on the right.) She's 100% German with a Chechnyan name from her mother. She told me that her parents live in Florida, but that she has never been to the US, nor has she seen her parent since she was a child. I did not ask further. Ms. Prochaska has become my new best friend (until later when I'm sure a ward nurse in the hospital will likely take over that role in a few weeks during chemo). This is the person I have identified to help me through all the beauraucratic procedures that I am completely unfamiliar with. She answers all my questions. And there are lots of them. Although not perfect, her English is 900 times better than my German. I'm glad she is so helpful. I'm going to ask Yuko to bring a box of Yoku Moku cookies from Japan to give to her. I think she will appreciate it. 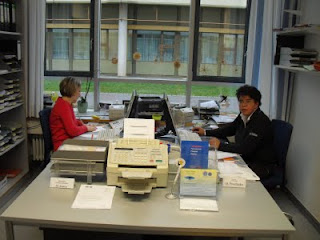 Then I sat down with Dr. Raab (my attending physician pictured on right). Later Dr. Thalheimer stopped by (BMT coordination doctor pictured on left) that I initially worked & coordinated with before travelling to Germany. Both of these guys are really great people. Not just obviously technically excellent, but very nice fellows. These are the kind of people that I would loan my house keys to. 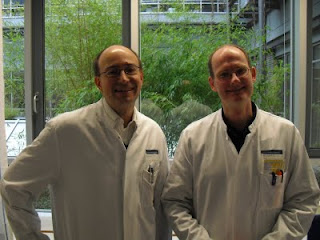 Dr. Raab did some of his early residency work at a hospital in New Orleans and also lived in Boston for three years while working with Harvard's Dana Farber Cancer Institute. He's qualified. Nuff said.

The really great thing is that I could sit down with Dr. Raab as the main person coordinating all the treatment without regard to time. There was no rush to get the meeting over, as is the case with many US facilities. Throughout the day in several meetings we spent hours together and discussed and planned everything.

So before a I went through a bunch of required tests (to make sure my body is strong enough to tolerate the treatment), Dr. Raab discussed with me about changing the treatment protocol from BEAM to just two days of Melphalan. Although he did not favor one specific regimen over the other, he said that it will have the same myeloablative end-effect (will completely ablate and suppress my immune system), but that it is administered over two days instead of five, as is the case with BEAM. So this means I can shorten the trip by a couple days. Dr. Raab did mention that the latent side effects tend to take a little longer to clear with Melphalan-only treatment. So I asked him to take some time and think about it further and then I would follow his advice as to which protocol to follow. I'm confident that both will acheive the desired curative effect. [Post transplant note: I stayed with the BEAM protocol simply so that the procedure results could follow the population baseline of the HALT-MS clinical trial.]

A note about Melphalan. . . for chemo drugs this is the nastiest of the nasties. As I mentioned before, this is one of the drugs originally derived from mustard chemical weapons agents developed in WW I. Melphalan is the drug that causes the most (and most undesirable) side effects. But, it also is the drug that has the most potent ablative effect on the immune system, and that's why I'm here. I'm OK with it. More info on Melphalan:

I also brought up the subject of concomitant administration of an immune system suppressant during the mobilization phase. During Mobilization with Neupogen, in addition to the desired effect of CD 34+ stem cells migration into the peripheral blood stream needed for collection and transplant, there is also the effect of mobilizing lots of T-cells. This is usually not a problem for most people undergoing cancer treatment, so BMT oncologists such as Dr. Raab don't usually concern themselves with this effect. Unfortunately for me T-cells are an MS patient's nemesis. Prior stem cell transplant procedures for some MS patients resulted in severe MS-related exacerbations that were actually life threatening. For the HALT-MS study in Seattle they decided to coadminister Thymoglobulin, a potent immunosuppressive drug usually used for organ transplant patients. But in Europe they don't like to use Thymoglobulin off-label. So I pulled a paper from Dr. Richard Nash that did a prior phase I study on MS patients. They co-administered the steroid Prednisone at 1mg per kg body weight for ten days starting with mobilization treatment. So I will be taking prednisone at 60mg daily to suppress excessive T-cell activity in my body during mobilization. (This should be the only departure from standard cancer treatment protocols, but important for anyone seeking this treatment for MS.) I have to admit, that's a large dose of steroids! I've never taken steroids previously so it will be interesting to see how it affects the way I feel. But it's only for ten days. There should be no long term (negative) effects. I guess.

OK, next it was time to start getting tested. For brevity's sake here's what I did. . .

- Blood samples. God it felt like they took out a gallon. But I counted that they filled only six vials to cover 24 blood measurement tests. Part of this they're looking to see if I have any active viral activity such as HIV or CMV that could kill me with an ablated immune system.

- I also turned in my urine sample and am happy to say I finally got rid of that and glad to not have to keep carrying that around anymore. There's something creepy about carrying around your own urine in a container. I might as well as had a human head in the bag! Funny, they asked me to provide another "fresh" sample, too. Is that possible? Can urine really be fresh?

- Had a doppler sonogram of the heart showing all critical dimensions and flow rates. That was actually pretty cool to watch (with the red & blue flow pattern colors on the CRT). The chemo is especially hard on the pulmonary valves. So they want to make sure they're in good working order with no diseased flow patters. Apparently, mine are fine.

- EKG. It appears my heart is also beating. I guess that's a good sign.

- Then they sprung this one on me at the last second. . . they wanted a swab of my rear end. They want to check for GI tract infections (specifically for hard-to-treat MRSA they don't want to spread around the hospital). I can understand that. Before I even arrived at the hospital I figured I would have to check my modesty at the door. Especially considering the coming awful side effects I expect during chemo, I have already sold my modesty on e-bay and don't have any anymore. Do to me whatever you want! I feel worse for the young female nurse they forced to "do me."

Interesting that once you go to the department to get your test, when it's finished you have to wait a short time and then they come out and give you the paperwork of the result. I wonder if this is standard in Germany, or just this hospital? Anyway, I could look at the test results. It's all in German. But interesting thing is that German and English technical words are far more similar to each other as compared to colloquial language. So I could pick up a lot, if not most of what these reports said. Overall, I think I passed and will continue on to treatment. Whew!

Then I went back and sat down with Dr. Raab again. We discussed a very interesting subject together with Dr. Thalheimer. In the past the hospital treated a few patients with severe debilitating MS with stem cell transplantation (coincidentally the type of patients that respond least-favorably to stem cell transplantation). Apparently the hospital Neurology department was not included in the previous patient-approval process and they got pissed-off about it. Now the neurology department wants in on any process where a stem cell transplant is considered for a neurological autoimmune condition, such as myself. So Friday at 10:30am I have to meet with the neurologist to discuss this. I already know what's going to happen. . . . . same as my own neurologist. No neurologist that I am aware of would outright support a risky stem cell transplant for MS. This is closed-minded thinking and it will take several more years to change the attitude of the general neurological medical community to support doing this procedure for MS. So I will do my best to try to educate the neurologist (Dr. Storch-Hagenlocher) that this is the right thing to do. I feel mentally well-prepared for the talk because I feel well educated and well-versed on the subject. I'll let you know in the next post how it went. If they have a problem with it, Dr. Thalheimer has graciously volunteered to discuss the issue with them.

But the most important thing. . . . Based upon my discussion with Raab and Thalheimer, I don't think the neurology department has the power to stop my treatment, even if they disagree with it. In Raab and Thalheimer's words. . . "It's your decision to have this treatment." God I hope that I will have the last word. I really appreciate Dr. Raab and Dr. Thalheimer's support!

So now we are moving forward like it is a foregone conclusion that I WILL be receiving the treatment. Dr. Raab wrote me a prescription for the G-CSF Neupogen and Steroids. Picked them up from the pharmacy (had to pay $1,300 for five doses of Neupogen!), and will begin the first injection Thursday evening and begin the prednisone Friday morning. Things are rolling along, and that's great!

The plan is to take the Neupogen through next Tuesday morning and then test for stem cell count at 8:00am with Dr. Hundemer. If sufficient (>2M cells per kg body weight, >2.5M desireable) then we'll do the leukapharesis the same day on Tuesday Dec 8 to collect my stem cells from the blood. Dr. Raab introduced me to Dr. Hundemer that will be performing the procedure (pictured on the right). 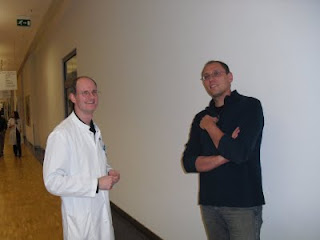 So Dr. Raab is leaving in the morning to travel to New Orleans to attend the American Hematological Association conference (largest in the world). While he's gone he has turned over responsibility for me to Dr. Hillengass if any issues should arise (no picture, but I did meet him. Another fine individual.) Dr. Raab will be back in the office on Monday Dec 14th and we will meet at that day at 10:00am to decide the final admission for the chemo. I expect that I will likely be admitted in-patient the next day, Tuesday, Dec 15 for roughly 20 days for chemo & engraftment recovery. I'm glad that I found out that Yuko and Judy will have 24 hour access to visit me when I'm in the hospital. No time restrictions. So happy about that. I hope they will be able squeeze in 15 minutes here and there between sightseeing and German beer drinking binges.

Last picture. Taken by Frau Prochaska of George waiting for his next test. Can't even remember which one. . . . 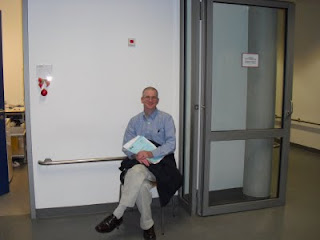 Thanks everyone! See you tomorrow.