Sightseeing day in Heidelberg prior to treatment

First note: Dan. . . Thanks very much for your call today! I take back some of those things I said about you. :-)

Today is the single free day (for me) before being admitted to the hospital for my three weeks of in-patient treatment. (Except for Sunday, but everything is closed on Sunday in Germany.) So I'm just glad that I had a chance to at least venture a little outside the hospital clinic complex to say that I saw something in Heidelberg other than blood & guts. So we decided on two objectives.

The first was to locate and evaluate a decent Japanese resaurant in Heidelberg so that Yuko can at least have a little bit of of Japanese food once and a while while staying here. Of course I love Japanese food, too, but cannot eat any more sushi for several months after today due to the risk of infection exposure. We got a recommendation from the concierge at the Crown Plaze Hotel for what I asked for "a very good Japanese restaurant." They recommended a place called "Konomi" on the West end of Heidelberg old town. So bear in mind that I'm thinking that people don't go to Heidelberg for the best Japanese food in the world. So I know I had to be flexible as a critic. On the way there it is great to look out the taxi window towards the opposite side of the Neckar river bank at the homes. Pretty cool, huh?! Very nice contrast to california living conditions. Heidelberg is a beautiful city. (Click to enlarge.) 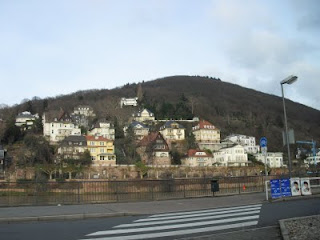 The taxi driver dropped us right at the front door of Konomi and it was encouraging that the people working there are Japanese. They have a reasonably complete menu of many Japanese dishes, but we opted for a sushi lunch. My review. . . . OK. Not bad. Not as good as "really fantastic" Japanese. But definitely edible. Much better than the worst Japanese food I have eaten at the only Japanese restaurant in all of Kyrgyzstan in 2003! 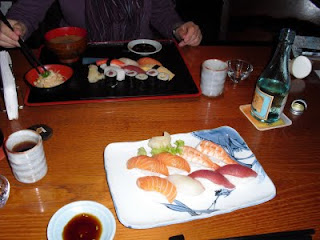 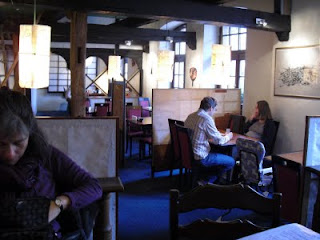 For the second thing following lunch Judy and I ventured a very short distance from the restaurant and entered the main pedestrian street that runs through the middle of old town Heidelberg. This place is great! Kinda reminds me of the pedestrian walk of Copenhagen, only more German (and less smoking)! There are so many nice shops of every sort and manner. I would like to have walked for a long time here, but unfortunately my legs don't currently go that far due to the MS. But we did get a flavor of the place. I'm sorry that I didn't know about this place earlier in my life or I would have come here earlier. I'm looking forward to Judy and Yuko spending time here during my hospitalization. (Please take more pictures and show me at Christmas!) 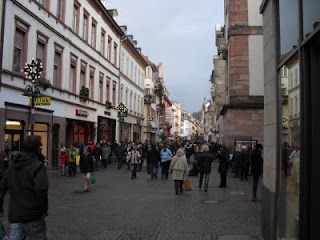 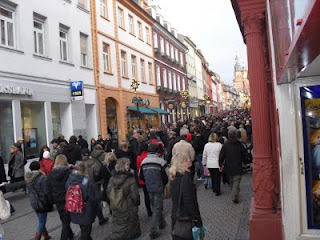 And I couldn't help but notice when we passed an authentic Heidelberg German Irish Pub. "Better than the Irish" I think is the motto of this palce. Well, so long as it has the name Murphy in the title, its gotta be authentically good, right?! Otherwise they wouldn't be allowed to display the shamrock! I'm sure Yuko is gonna want to drink a Guiness here. 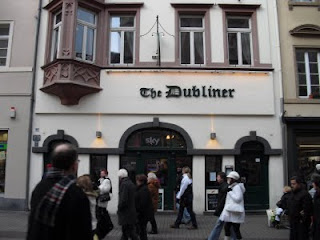 OK, but here is what the George & Judy recon team really came up with for Yuko's benefit. . . . Yes! Authentic Seattle coffee from Starbucks set up in an ancient Heidelberg city building. 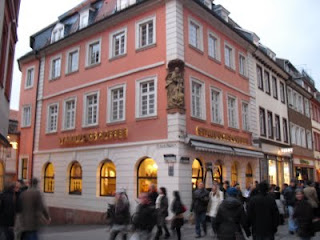 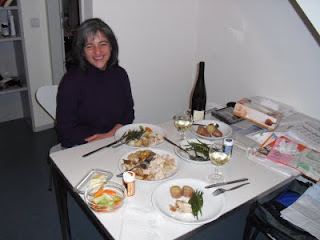 Last note regarding the superb English language ability of the German population (which has been absolutely no problem for us). It started to rain down a few snowflakes just before we left (not a lot, just a few that melted when hitting the ground). Then we caught a taxi and headed back to the guesthouse apartment. Judy mentioned the "snow," to which the taxi driver replied in perfect Heidelberg English. . . "No, this isn't snow. It's shit!" Well Sherlock, he had it right! And got a good tip for it, too.