Just posting the updated info on the current schedule first, followed by today's message (click on schedule to enlarge). . . . 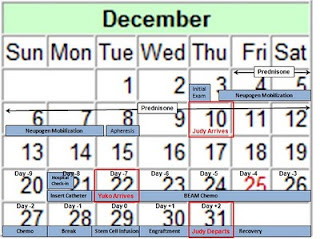 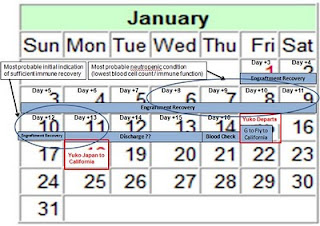 Just one more day waiting until I get my life back in the form of a cryogenically frozen bag of my own stem cells. . . . So today is a simple day of getting some saline solution and drinking plenty of fluids to purge any remaining chemo drugs from my body in preparation for the stem cell infusion tomorrow so that the stem cells have the best possible survival and engraftment opportunity. Following the stem cell infusion (either the same day as the infusion, or at sometime after that, depending upon Dr. McClanahan's judgement) I will receive a single dose of Neulasta G-CSF. This is really a fantastic drug that promotes stem cell replication, mononuclear cell mobilization and immune recovery to get my immune system back up and healthy at the earliest possible time. Neulasta is a relatively newer G-CSF drug (also an Amgen product just like Neupogen) that has a self-limiting negative reaction coefficiency in which it works constantly and as hard as possible to restore the immune cell function in the bone marrow. As the immune system recovers toward a normal level the Neulasta drug (administered as a single SC injection) becomes consumed and tapers-off it's active pharmacologic effect. So basically, it works as long as required and then extinguishes it's own activity when no longer needed. Probably why it's also an expensive drug. I'm expecting it to be well worth every penny of the cost. Especially since I should be able to expect the most rapid recovery possible with it's use. I'm going to have to check into buying some Amgen stock.

Different subject. . . . sometimes small things perk me up (other than Yuko & Judy's fantastic help and support here). The first of which is that I measured in my reduced water retention weight at 67.1kg this morning accompanied by my totally normal & usual BP level of 120/70. I'll keep my fingers crossed that it will not rise again. At least not to the level seen before.

And then I just wanted to make one more comment about the hospital food. Honestly, I think the kitchen that prepares the food here at Heidelberg University Hospital does a very good job. No joke. Today I had a very delicious chicken in a sauce and potatos together with some salad and a nice minestrone soup. That hit the spot! 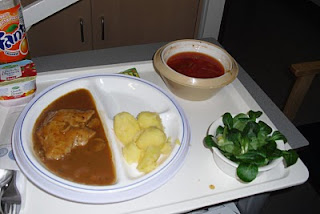 In anticipation that my stomach will likely eventually become weaker to take more solid forms of food, I went by the hospital cafeteria and picked up some extra packs of chocolate pudding and fruit pudding that I can eat when I don't feel like solid stuff later. I just store it in the ward refigerator until I need it. Yuko suggested that I might also try some jars of baby food that they also store and provide to patients that might need it. What? I suspect she's trying to tell me a different message. Yuko! . . I'm not whining THAT much, am I?!

My new "Birthday" tomorrow with a simple stem cell infusion. I will get my life back, and just as important (the whole reason I'm here!) this will mark the major milestone for curing my Multiple Sclerosis! I do beleive that based on the overall published scientific data, it should be just a matter of perhaps a year, or less and I will come to realize that I will be cured (halting of disease progression) of MS. And then I'll also have better-then-even odds that I will also be able to experience a reversal of actual disease progression. Although not gauranteed, my EDSS score of 3.5 bodes particularly well for the distinct possibility that I will be able to actually run again and be physically active with my son, Riki. I'm looking forward to the one-year stem cell transplant party we will plan for December, 2010 (where the Heidelberg medical staff will be invited as special "hero" guests) so that I can personally demonstrate my recovery and improvement.

See you tomorrow for the simple, but important day!