Today I have compiled my relevant blood test result numbers in the following image (click to enlarge). My leukocytes (all combined five white blood cell types in the human body) are dropping fast. The normal range is usually above 4000 / nL. This morning's blood draw tested out at 1350 / nl. So everything is going per expectation and I should be neutropenic (zero immune system) definitely within the next 4-7 days, for sure. One consituent of the leukocyte family, called a neutrofil (a type of white blood cell that specifically attacks bacteria and fungi) is also an important number to measure. The neutrofil count is also quite low at 1000 / nL. Eventually that will also hit zero.

Just in case you want to understand more about the various leukocyte cell types circulating in the bloodstream and their specific functions: 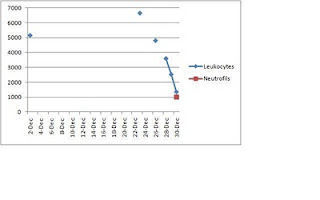 So basically everything is going as expected. I have been warned that the worst side effects are yet to come. But they should last about a week, maximum. I still haven't had any nausea yet, nor any overt indication of mucositis. But my stomach is definitly unsettled. For the past three mornings I've had some strong discomfort with what feels like eosophageal acid reflux [post transplant note: this is the one mucositis lesion in my eosophageal pasageway I got from the chemo]. The nurses gave me some antacid liquid I can take when this occurs. It does not have an instantaneous effect and takes a while to kick in. But eventually it seems to do the trick.

For food, more often I'm turning towards the pudding and pasturized yogurt with a litle fruit in it. Jergen suggested the pear & apple baby food for when it get's really bad. I think I probably will do that.

Also. . . This morning the nurse removed my neck catheter. The upside is that it will be much better for me to take a shower without having to worry about keeping it dry. On the other hand, I'm going to now have to get stuck daily with needles for the blood tests and/or medication they might need to administer.

Yuko and Judy bought some non-alcohol champagne for me to share with some of the fellow patients in the Ackermann ward during New Year. I hope your New Year will be a step-up compared with my scenario.