Day before meeting the doctors

Today (Wednesday) I checked into the University Hospital guest house. In addition to a livingroom area and small kitchen, it also has two bedrooms, a full bathroom / shower, and also has a half bathroom that visitors can use use. (Not sure how many visitors we'll have, but if Obama shows up he'll have to use the visitor bathroom. The presidential bathroon is only for me and my family!) There's also an upstairs loft with a computer desk and another (small) bed and large walk-in closet. The place is spartan, but large at 120 square meters with internet included in the price. At 2400 euros, it's expensive (for Americans with a weak dollar), but a bargain at this price. I'm really glad that it is as close as I can live somewhere near the hospital. 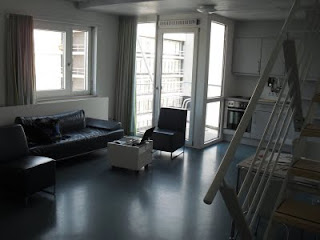 It's on the 8th floor and looks out toward Heidelberg castle and also has a view over all of the University hospital complex. 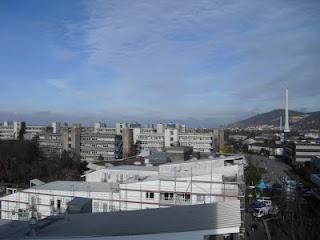 At at the base of the apartment building there are a few shops (cofee & bagle. . . Yuko will love that!). But also there is a nice restaurant that serves different types of food, mainly italian. They also have a bar (although I won't be taking much advantage of this, but Yuko & Judy can). I had lunch there today and the people are friendly. And the poached salmon was pretty good, too. 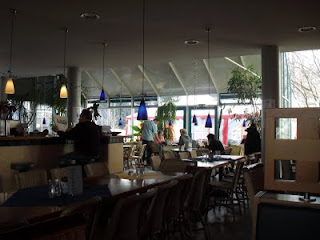 Although there is a tiny convenience store a short walk away, there is no large grocery store within walking distance. The train and bus are not far away though, so I'll have to figure it out this weekend. BTW. . . in Germany, bring your own bags to carry away the items you purchase in a store. Bags & containers are NOT provided. Forces the public to re-use shopping bags. I've just been using my jacket pockets so far. But that's obviously not going to work for larger purchases. Maybe I should buy a backpack? This weekend, for sure.

Onto a touchy subject. . . . what are the german people and society like from what I have experienced here? We'll, so far I notice three main things about interacting with Germans.

#1) I have a perfect disguise in Germany. So far not a single German person could tell by looking at me that I can't speak German. Exactly the opposite of my experience in Japan. At least I can speak enough Japanese to eek by when visiting my in-laws in Japan. I can survive there with no English. But good for me that nearly everyone here in Germany can speak enough English (some better than me!) to help me since I am otherwise helpless. Bravo to the great education system in Germany!

#2) When did it become normal to be fat in the United States? I have yet to see a single obese person in Germany. I'm sure there are some, but I haven't seen any since I landed here. Completely the opposite of the US where a majority of people are overweight. I wonder what the Germans are doing (or not doing) that Americans aren't? If I chance to come across this discovery I'll share the secret and pass it around. For me, at 65kg and 174cm my BMI has never been more than 22, so I'm a little worried about losing a lot of needed body weight when I get the BEAM chemo. I hope those IV drip dinners in the hospital are tasty and high calorie!

#3) Well. there is one thing. . . the German poulation smokes more than in California. But frankly, even though I hate smoking it's not that terribly over-oppressive here. Yes, they smoke, but it's not always in-your-face like Korea, China and some places in Japan. I also remember Denmark and the Netherlands being much worse. I can survive this.

And let's talk about German people a little more (gotta poke some fun at all my good German friends). . . . . . . . I have heard many people describe Germans as cold, curt and overly dispasionate. But I don't see it that way. I find average Germans precise, courteous but to-the-point. (Of couse this does not include my German friends like Bernhard and Frank. You guys are mad party animals. Go wild!) Bottom line, the people here are friendly and pleasant to interact with. And they appear to be less narcissistic as compared to average Americans. I don't think it would be a bad thing if I were forced to live here.

I'm going to meet up for the first time with my doctor (Dr. Raab) tomorrow (Thursday) morning at 9:30am. I have been collecting my urine since 8:30am this morning in a large plastic bottle and will continue to do so until 8:30am tomorrow morning. I've never had to give a sample like this before but I heard it is common in Germany. I'll have to say "Merry Christmas" when I hand it over.

I also brought along a printout of all my blood & urine test results I had done by my Kaiser doctors before leaving California. The test result that amazed me most was from my Oncologist (Dr. Vempaty) of the total blood counts. Everything was in the normal range except for white blood cell (WBC) count and Neutrofils (a type of naive WBC) count. These also happen to be the main measures of the stem cells in the body coming back to life and is the measure of when I can be released from the hospital. These were my pre-admission numbers:

This is the first time I have seen these numbers and they are definitely below the general population norm. Under normal circumstances this would be very concerning and pointing to a potentially serious problem. However, this all makes sense to me because for the past 14 years I have been taking weekly injections of interferon beta 1-a (Avonex). It is a well documented effect that interferon beta reduces T-cell production and hence reduces MS attacks. So when I see these low WBC counts I retrospectively realize that the interferon was doing it's job. Unfortunately interferon only slows the progression on MS. It doesn't stop it. Hopefully this stem cell transplant will do it for me and stop the MS.

Thanks to all!
Posted by George Goss at 1:24 PM